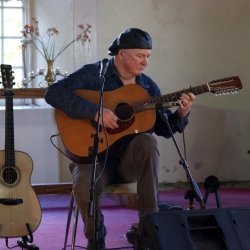 As part of our ongoing Guitar Master Series, we are pleased to bring to the Stonefield Cellars Barrel Room, all the way from Ireland, Gerry O’Beirne!

Born in Ennis, County Clare, along Ireland’s music-rich west coast, Gerry O’Beirne is a renowned singer, songwriter, record producer and guitarist (6 and 12 string guitar, tiple, and ukulele, slide guitar among others).  He grew up in Ireland and in Ghana in West Africa, and has since lived in England, California, and Mexico. He lives now near Dingle in Co Kerry. His own compositions blend the passion found in traditional music with the freshness of contemporary song.

Gerry’s much loved first solo album Half Moon Bay features The Holy Ground, Half Moon Bay, Western Highway and The Shades Of Gloria which have been sung by Maura O’Connell, Muireann Nic Amhlaoibh, Mary Black and many other great singers. His second album The Bog Bodies And Other Stories: Music For Guitar was named CD of the Month on the American radio show Echoes, and one of its essential albums of the year. “Yesterday I Saw The Earth Beautiful”, a duet album with fiddler Rosie Shipley featured his own songs, settings of poems by Paddy Kavanagh and Nuala Ní Dhomhnaill along with traditional tunes from Ireland and Cape Breton.

Gerry has toured the world as a solo artist and with the Sharon Shannon Band, Patrick Street, Midnight Well, Andy M. Stewart, Kevin Burke, Andy Irvine, and the Waterboys.  He has performed at the White House, opened for the Grateful Dead, played electric guitar with Marianne Faithfull and thought nothing of playing with a Romanian orchestra and choir in a cemetery in Transylvania at night. He has written music for film and theatre and appeared on Garrison Keillor’s A Prairie Home Companion. Recently he has been working with New York composer Peter Gordon on a recording of the music of the legendary Arthur Russell, and recorded recently with Peter Gordon and Tim Burgess of the Charlatans.

“The instrumentals are out of this world. A self taught master of the 6 and 12 string guitar, the playing of O’Beirne is superlative and subtle beyond words.” – The Sunday Times

“A masterpiece.” – Folkworld about Half Moon Bay

“He’s a lovely singer, a powerful performer and a master musician.” – Evening Herald

One of the great things about our Barrel Room is the intimate setting it provides so that you will be able to hear the intricacies of Gerry’s playing and every lyric in the musical stories he will present!!!!

COST: Advance tickets are $18, $16 for Wine Club Members, $20 at door. See below for advance ticket option! (Wine Club Member’s please call the winery at 336-644-9908 to purchase discounted tickets! Discount limited to 4 per household.)

DRINKS: Wine, Beer, and non-alcoholic beverages will be available for purchase.

FOOD: As there is no food vendor for this concert we recommend eating beforehand. Outside food is allowed in small quantities (think snacks, small plates, or tapas), but please be considerate of other guests- don’t bring smelly or pungent food items. We will also be selling snacks such as cheese, crackers, peanuts, and a wide assortment of locally-made chocolate for dessert during the evening!

EVENT POLICIES: No Pets, No Outside Alcohol, No Smoking (anywhere on our property, including our parking lot!).

*Barrel Room Concert Etiquette Reminder: This concert will be held in our intimate barrel room and is intended to be a listening experience. The audience is expected to be respectful of the artist’s performance and their listening neighbors, so loud talking and cell phone use is discouraged.